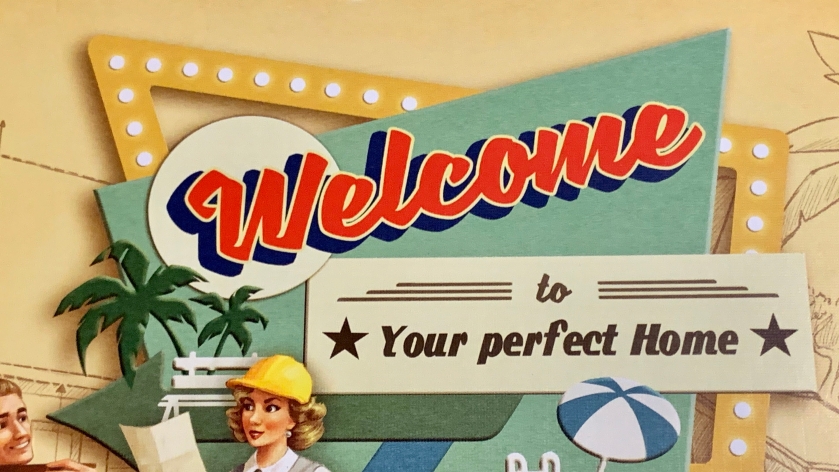 What We Are Playing is not limited to solo play reviews – but we’re getting a nice collection.  I love a good competitive multiplayer game . . . when I can get one.  But sometimes I (and probably you) must, or prefer to, play solo.  I played 33 different games solo in 2019, and enjoyed most of them.

Some games go really well solo; some are even a bit better in that mode; others are . . . the word ‘limp’ comes to mind 😦

Are popular games actually fun?  Are they any good solo? Will you like them? These are the questions we’re trying to answer in our What We Are Playing solo play reviews.

You can click on the ‘solo play review’ category in the top menu or side navigation to find these – or here is a current list (click any picture for the review):

Forge me up a silk and mithril mace with quartz highlights, will you?

Smiths of Winterforge is a Family level game of Short + length.  It is playable by 1 to 6 players.

This review focuses on the solo play experience.

Smiths of Winterforge has a built-in solo mode with a custom deck of solo cards for variety – it is a ‘beat your own score’ mode of play.

Here’s what we mean when we rate game ‘weight’ or level or game length.

The best bits of this game are the use of weird and wonderful materials to craft the desired items.  Fancy some birch and bronze boots?  This is the game for you 😉

Also, my version (Collector’s Edition) has some very, very sweet metal coins (call me shallow, if you wish… I will not dispute it.)¹ 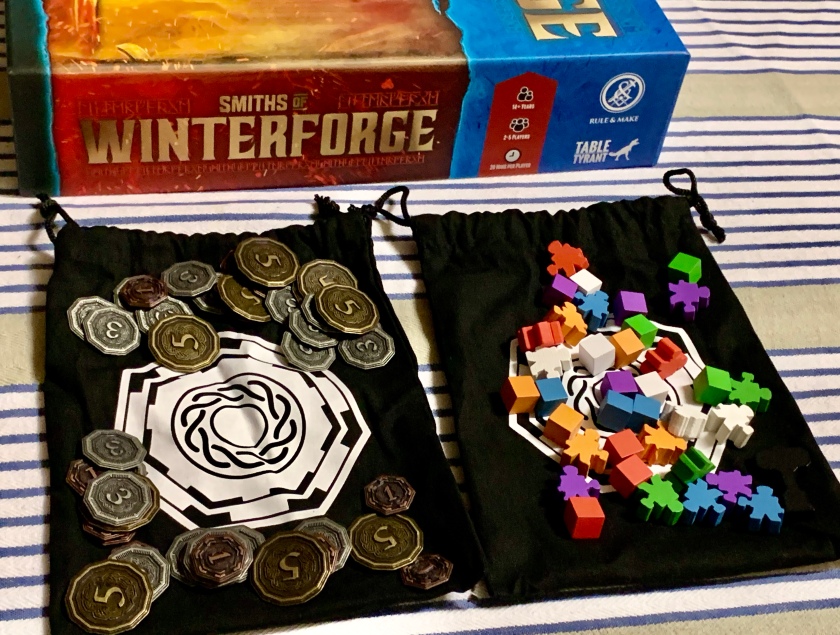 The worst bit of Winterforge solo is that it loses a bit of the interest and tension.  The materials in the market don’t rotate enough for real interest; there’s not enough conflict / competition and it lacks that compelling feeling which the multiplayer game has.

Smiths of Winterforge does a good job of delivering the feeling of working away in your dwarven forge.  Each contract blueprint which you take indicates how many of each type of component you need – say, one ‘base’, one ‘binder’ and one ‘decorative’ element.  At times, you’ll get a bonus for a specific component – say, +2 to forge a breastplate with bronze – but nothing forces you to use specific items.  You may think that boots would make sense with horn and hide – but birch and bronze will do the trick!  Now, what can I make with silk, twine and rubies….? 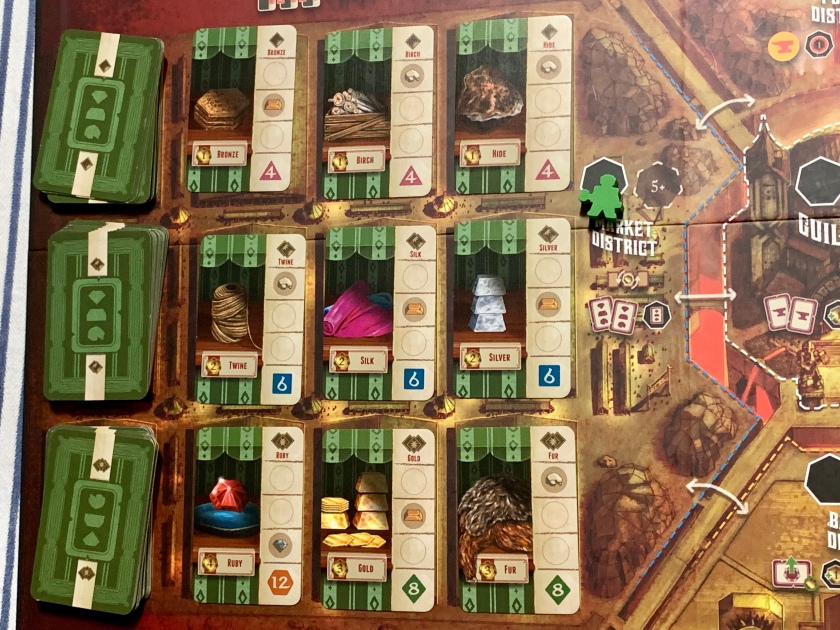 Forging has a planning element and also a luck element – the components contribute dice to a pool, and better (more expensive) components contribute dice with higher values.  If you roll your forging target number (after skill, material, and crew adjustments) then… success!  Quartz decoration will add a d6 towards forging, but (much more expensive) diamond delivers a d12 + d4.  Failure on your first attempt is not unusual – but all is not lost! If you stick to the task, each effort gains +1 by adding ‘work tokens’ until the crafting is done.

Adding the right crew, and getting the cash to fund the components is part of the mix too. Successful crafting will improve your skill  in jewellery, weapons or armour – whatever you successfully forge.  You’ll need this skill because, throughout the game, you’re working towards your royal contract, which will require a decent level of skill, the fanciest of components, and a dash of luck.

The deck of solo cards simulate events which occur during the limited number of rounds.  They do add variability and replayability to the game, together with the random draw of components and contracts.

Unfortunately, Smiths of Winterforge falls a little flat for me as a solo play experience – the solo cards are (in my opinion) actually better when added to the multiplayer game, to foil or enhance the plans of several competing dwarves at once.

I’m normally open-minded about ‘beat your own score’ solo games – A Feast for Odin and At the Gates of Loyang are two of my favourites, and retain a real challenge as solo games – but this method is not a great success in Smiths – the solo really needs an Automa or alternate solo challenge, in order to be a satisfying solo experience.

BoardGameGeek rates this game as 2.36 out of 5 in weight, (at the time of publication of this review), though that rating doesn’t distinguish between solo and multiplayer games and so is not adjusted to reflect the changes involved in solo play.  I consider this rating slightly overstates the complexity of the game – Smiths is a fairly simple move-and-act, collect-and-apply-resources game.  There is a modest amount of simple engine-building, and a few ways to score points (assuming you include the optional ‘laneways’ expansion which comes in the base box), but I consider it ‘lighter’ than that BGG rating.

It appears that Smiths of Winterforge has been a bit of a sales disappointment for the publisher, because it’s widely available and cheap at the moment.  It is a crazy low $29 from DungeonCrawl at the moment – it’s a lot of game, for that price.  However, I don’t recommend buying it if you only plan to play it solo – it’s much better with 3 to 5 players².

¹ I doubt you will get these sweet metal coins in the retail version for the current low, low price, so please check to avoid disappointment.

² Technically it plays 6, but with some special rules – I’ve tried that; stick to 5 maximum, in my opinion.

I have never found a companion that was so companionable as solitude. We are for the most part more lonely when we go abroad among men…